For the past few weeks I have been using the Peach Pudding Makeup Cleanser from the brand Peach Slices. I admit I bought it mostly out of curiosity. I really like the Glass Skin serum from Peach and Lily and when I go to the Peach and Lily site I often see this Peach Pudding, along with a lot of other items from not only Peach slices but other Korean brands as well. It is one of those sites that is really fun to poke around on because even though it is serious skincare a lot of their products are packaged with a lot of whimsy. Take the moisturizer that I purchased from them recently. It is in a cupcake shaped container, or maybe an ice cream cone, I can’t remember but it is really cute.

But this is not about the moisturizer, it is about the Cleanser. And cute packaging is one thing, but the product has to work.

This Cleanser is called Peach Pudding and decorated with a large Peach on the cover. Unsurprisingly, it smells of peaches when you open the container. I think I’d be rather disappointed if it didn’t. However it is not the sickly sweet Peach scent. I don’t feel as though I am smearing peach cobbler all over my face.

The white cream has a clean and fresh skincare scent to it that is blended with peaches. It smells more like you are walking past a basket of freshly picked peaches at a farm stand than anything sweet enough to feel sticky.

I know that sounds a little strange but sometimes when I smell sweet things that I associate with a sticky sugary thing then when I apply the product I sort of feel sticky even if the product isn’t actually sticky. With this that wasn’t a problem. Even if it is called a Pudding.

Pudding is actually a decent term for it. Most of the cleansing products I have tried are oils or balms. This has the consistency of a moisturizer. I would say it is more like a gel cream than a water cream, but it is that sort of range.

To apply I took a little out of the container and then rubbed it all over my face as though I was applying a moisturizer. Although it was over makeup. It melted the make up off really well. I had trouble with mascaras and had to go in switch my Klorane Coneflower Waterproof eye makeup remover, but on all other products it worked really well. It took down the brightest of my red lipsticks and had no issues with shadow.

It is a hydrating make up remover, which was something

I didn’t really care for. It removed the Makeup well and when I rinsed it off my face felt a little greasy. It wasn’t that big a deal as the makeup remover is only step one in my nightly skincare routine and I followed it up with my current Cleanser, the Korres Foaming Cream Cleanser. The Korres took the greasy/hydrating elements of the Peach Pudding makeup remover right off. It is however something to be aware of. If you have very dry skin, it might not be an issue for you. For me, i didn’t care for it and was happy that my second cleanse removed the feeling.

Besides that one thing, I have to say I really enjoyed using this Cleanser. It works really well, uses only a little product, removes makeup without stripping the skin and a 100ml sized jar only costs $9.99. I was pleasantly surprised by how much I liked the texture of the cream Cleanser as well. It is definitely a product I will be repurchasing. I will also always use a second Cleanser, but I will certainly purchase this Peach Pudding Make Up Remover again. 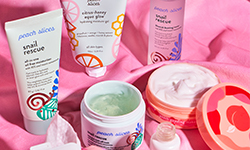