Hell my darlings. have you ever had that moment where you are using a product as you always do and suddenly you read the packaging and have a eureka moment? Maybe it is just me, sometimes I can be a bit slow, especially before my coffee. So this morning I was doing my morning skincare and I reached for my moisturizer, which at the moment is the Embryolisse Lait Creme Concentre (retail $28 – which I list here because it is just an amazing price for such a great moisturizer)) and I see the words Multi Functional on the tube.

And then I remember seeing something about how makeup artists had been recommending this dermatologist created product since the 1950s. At first I thought, ‘we’ll yeah, it is always easier to put makeup over good skin.’ Then I went a little further and realized it could be used as a makeup base so today before i put on my makeup I applied a thin layer and let it settle in for about ten minutes.

Giving it that little time to settle in was perfect. All of my products applied better this morning than usual. I think as soon as my month long trial is done, the rest of this tube is being relocated to my dressing table for pre makeup use as I switch to the second moisturizer in this line. I was just floored. I think part of it is that this Foundation has tended to look a little dry in the afternoons and applying the Embryolisse before completely eliminated that. It does alter my opinion of the foundation slightly, but by now I already more or less know how I feel about it. I just had to share about the Embryolisse because I was so excited. And now I am just going to jump into the makeup today because I did end up adjusting the products. I’ll get into it below. Let’s list them first.

Highlighter: Wander Beauty Wanderess Glow Afterglow Highlighter (now back in stock, woo hoo! Its been out a while.)

Setting Powder: Becca Pink Haze (discontinued, I know but I am trying to use it up while I search for a new Pink toned setting powder)

Okay so I started with the Embryolisse and Quite honestly i may be starting with that as my pre makeup base from now on. It made everything apply better because my skin was recently hydrated and it kept products that have been drying out in the late afternoon from drying out because the layer of moisture was added just under them. Big fan of that. That may be my makeup hat trick from now on.

I had planned to see how the Charlotte Tillbury worked over the Tatcha primer when applying with the makeup sponge and not using the brush and so I went with that. I adore the Tatcha primer so using it was easy to talk myself into. The Tatcha was as always beautiful to work with. I absolutely adore the scent as much as the product. Today I used the Natasha Moor Sponge to apply the foundation. I have some thoughts about the shape, but I’ll save the sponge review for later. The foundation does work better with a makeup sponge application. It just is always going to streak a little if you use a brush. Some foundations are like that. Its just good to know which ones and use the right tools.

Today I used the concealer around my eyes. I actually put it on before the foundation and after the primer. Mostly because I noticed that this foundation has been settling into the fine lines around my eyes in the late afternoon and concealer tends to hep me out. The primer fills in the lines smoothing the canvas of my face and then the concealer on lids and around the eyes adds just that little extra layer to block the foundation from sinking in. I also discovered that I am almost completely out of concealer. I rally like this Maybelline one and will be replacing it. while I like others, this one has worked the best for me.

I know i was supposed to continue testing the Nudestix bronzer, but everything was applying so well and it was not the best at blending. And the Too Faced contour palette had been left out so I just went ahead and reached for it. As always it worked fantastically well.

Since I went ahead with what would keep the nice application going I went with the Gold Rush Blush and the Wander Beauty highlighter. I know you probably get sick of me rolling them into the mix a lot, but they are both beautiful products. I will shake things up and rotate more of the products, but for today, they were fabulous.

I am still trying to use up the Becca Pink Haze while looking for a pink tones setting powder to replace it with. If anyone has any suggestions please let me know. I’ve tried a couple but none of them work quite as well. Still as Becca has gone out of business, I must find a replacement.

I used the brow wiz because I was reminded I had it by the arrival of a trial size. I like this product and don’t mind using it. It isn’t my favorite formula, but it works well.

While I will always love my Big Poppa Mascara, I am still on the fence about this Nomad Palette. I love the formula, but this palette is really not a stand out. I reach for it because it is easy, works well and doesn’t require a lot of thought. I always come out with almost exactly the same look. The red toned hues work well but the browns not so much. So everything in this palette ends up looking similar for me. I am on the fence about it staying. Because it is so quick and easy to use I reach for it, but I also know that if I got rid of it there are palettes I enjoy more that i would reach for just as easily. It is something I need to think about before my next declutter. While Nomad’s Berlin Underground will stay until the pans are down to empty metal, the Tuscany themed one might not be around much longer.

And finally we have the lips. I like the color of the Persona Lip liner and it is creamy enough to apply all over the lips. However ten minutes after applying my lips are gasping for moisture so I put the Thrive cosmetics clear topper over them. I really like the look of the pairing. and my lips don’t feel dried out and desiccated. In general I Like Thrive products. Their mascara was fantastic and this lip topper is a good one, I just need to remember to reach for it more.

And that was todays look for me. Honestly i was just so blown away by using the Embryolisse as a base that I forgot everything. The sun is shining, the walk on the trail was nice and work is as always crazy. But today, my makeup also looks pretty good. 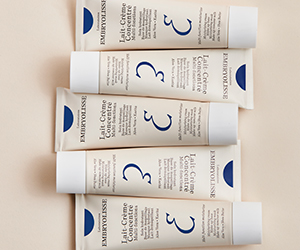 The Fifteen Minute Novel writing experiment returns for its third year. At the start of the year I take one of the timed writing exercises from the year prior and each morning I use the last sentence from the day before to continue the story, creating a full draft over the course of a year. Follow along with each day's installment at ten-til-midnight.com

Free micro lips with orders over $75

Inspired by our movie-making heritage and the belief that everything you use on your skin should nurture its vitality, our makeup contains soothing botanicals to improve skin health while ultra-fine pigments enhance the beauty of your complexion.