Smoothie Box very kindly sent me their monthly smoothie box for the purpose of review. The full subscription review you can find here. As I make my way through the box I am reviewing the individual smoothie types in the box. I received the Variety pack and it contained four separate flavors. This Super Smoothie Berry flavor is number three.

With these smoothies, each pack contains two portions. In general I will always make both portions at the same time, however if I am using it as a snack instead of as a meal, I will only eat half and save the other half for the next afternoon. I still mix them at the same time, then split them, put the unused half in the freezer and then the next morning transfer the un consumed half from the freezer to the fridge. By the time I am ready for my afternoon snack it has the right consistency again. It is super easy and something that really helps me out on days that I know are going to be jam packed.

This smoothie has the lowest calorie count of the smoothies I have tried from the brand. It has 90 calories per serving. For me this was an interesting one. I generally find that if my smoothies are too sweet, my brain thinks of them as a desert and I don’t really feel like I’ve had a lunch. It will feel like a snack rather than a meal and then no matter how many calories are in the mix I will still feel like i should eat something.

If I am using it as a snack then I am fine with the sweeter varieties. Thus far it hasn’t been a problem with the Smoothie Box Smoothies. They have had enough savory elements that I think of them as a meal. With this Berry Smoothie I mixed it up with Almond Milk (one of the recommended liquids). It was absolutely delicious. The issue was that it tasted like a fabulous berry flavored milkshake.

I think part of it is that I always find almond milk to be a little on the sweet side. Once I tasted it, I knew it would be too sweet to serve as a meal, so I went ahead and divided it into two and froze half. I’ll have the other half as a snack tomorrow afternoon.

It was absolutely delicious I just can’t think of something that sweet as a meal. which is my own personal preference. As a snack though, it felt completely indulgent. I found myself double checking the calories. (90 x2 + 60 for a cup and a half of almond milk = 240 for the shake, split in half is 120 cal). It felt like it should have been a lot more. And because it felt like a lot more, I did a little extra in my work out telling myself “Think about that milkshake you had as a snack”. which helped me out in other ways.

I think if I were to use this as a lunch, I would use skim milk and possibly throw a knob of ginger into the mix to make it a bit more savory. However that being said, I am okay with having one variety of these smoothies be designated as snack smoothies rather than lunch time meals. That may just be it’s lane. either way i was delighted with the taste and am looking forward to indulging in the rest of the Super Smoothie Berry bags from the pack. 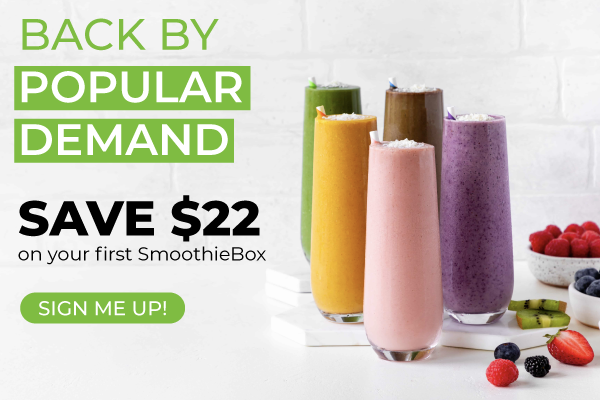