I know, some of you are thinking, ‘But Mimsy I don’t drink coffee.’ I know, and I got you. I am a huge coffee fan and quite honestly I do love a cup of French press coffee.

And I will admit, I bought my first French Press because I had a cup of French Press Coffee and not only thought it tasted good, I thought it looked cool. and I do love a bit of cool Kit. I have several coffee presses and I will tell you that this is one of my favorites because it comes completely apart for easy cleaning, however the truth is i like the orange.

For those who have never used a French Press, You grind your coffee and place it in the bottom of the glass carafe. You then pour boiling water and let it steep (generally around four minutes) then you lower the plunger. The press pushes the grounds to the bottom while leaving the coffee clear and free to pour. The inside lid of my coffee press has a divot cut out for easy pouring. Most do. it should turn so you can keep the heat in while you brew and then turn to dispense. (at the bottom of the page is a diagram with measurements and timing if you are interested.)

I know, not an earth shattering revelation.

Prior to this I only had drip coffee (this was quite some years ago). I loved that i could play around with the strength of the coffee by altering the time I let it steep and adjusting the grind of the coffee. But most importantly I found i could adjust the flavor by adding things to the grind. I believe a cinnamon stick went first. I remember cardamom pods went second and then the third time i tried it, I combined both the cinnamon stick and the cardamom pods.

I played around with different additives for my coffee and then I finally thought, what about things other than coffee? i started playing around with beverages. There were things that needed to be boiled like blueberry simple syrup. I made the simple syrup, added the berries to the caraffe and let them steep then lowered the plunger. I also made cold things. I took out the plunger added a bunch of fresh black berries, filled the caraffe with gin and covered the top with plastic wrap. I sat it in the fridge for a week, took it out and used the plunger to seperate the blackberries from the gin. I actually tend to make that almost every summer so we can use it for cocktails.

However, once my brain switched out of ‘this is a coffee press’ mode, the world was my oyster. As long as the world fit into the coffee press.

While I love making coffee with my coffee press, my favorite thing to do is to use the press to adapt store bought stock. Chicken stock from a reputable brand is fine, but often it tastes very one note. It honestly tastes like chicken, which is what it should taste like. And Veg stock can often just sort of taste like salty water that might once have been near some vegetables.

But boiling up the stock and putting it into the coffee press with crushed ginger, a crushed garlic clove, lemon zest and some bruised rosemary turns it into something else.

Once you have let it steep you lower the plunger and keep all of the added bits in the bottom of the carafe while the delicious, freshly infused stock, tailored perfectly to your taste and your dish, is poured out and ready for you to use. You don’t have to wonder if someone is going to bite down on a chunk of ginger or garlic, or suddenly find themselves flossing with a bit of rosemary.(Although rosemary is sneaky, I suggest leaving it on the stem and using the back of your knife to bruise the leaves so they let out the oils into the liquid but stays as a branch.)

In my house we keep a couple of different coffee presses. We have both metal and plastic ones. Part of why we have multiples is that I had a couple and my babydoll had a couple and then when we combined houses we had many. This carafe is glass and the plunger is metal which doesn’t tend to keep flavors and if it seems like it isn’t getting clean enough by hand, we put it in the dishwasher which takes anything off of the metal, especially on sanitation mode. My babydoll thinks that the plastic of the carafe (which I don’t send through the dish washer) I use for stock smells like herbs, so we have a separate one so the coffee is never rosemary scented.

I have had to replace the glass carafe and places like Grosche International do carry the glass carafe separately. They also sell replacement plungers if yours has reached the end of it’s life. I know we had to replace a plunger on another one we have a while back. I keep thinking i will purchase a new one at some point, but honestly they are such a simple mechanism that if you take care of them they will last for a really long time.

Personally, I consider this one of my essential Kitchen tools. While I love it for coffee, it is a true multitasker. even if you don’t drink coffee, I would urge you to look into picking one up and playing around with it. they are fairly inexpensive models out there and they are versatile enough that I think they easily earn a place in even a non-coffee drinker’s kitchen.

Although if you are using your coffee press to make coffee, this helpful image from Grosche International has all the measurements and timing you need. 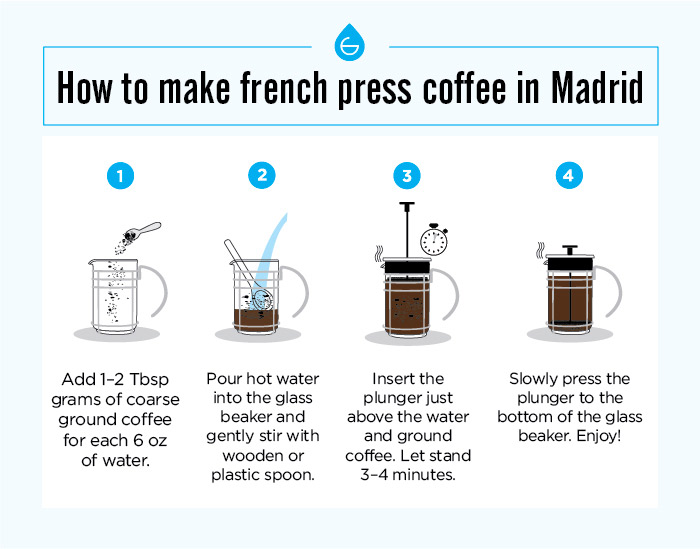